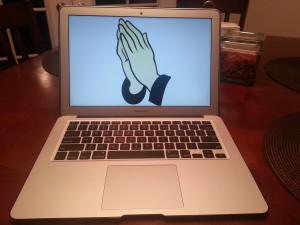 Praying can be hard. It’s very easy to find things to do instead of praying because actions seem to more directly result in the outcomes we desire. Prayer occasionally garners an immediate result or response from God, but usually has long-term effects that aren’t discernable until a much later time.

Jesus famously told his disciples, “the spirit indeed is willing, but the flesh is weak” and coupled with endless prayer lists, (as creatively portrayed in the movie Bruce Almighty (Note: Links to Amazon in this post are affiliate links)) it soon becomes clear why prayer frequently reduces to variants of “Lord, please help…Amen”.

If every prayer resulted in instant feedback, we would probably be more motivated to persist in it (because of the power of feedback loops). If prayer were reduced to simply giving thanks before a meal, it might be more manageable (following the “making change seem easy” technique from Switch). But instead of these two approaches, Scripture says to “not be anxious about anything, but in everything by prayer and petition, present [one’s] requests to God” and to “pray without ceasing“.

How do you pray without ceasing? Are we expected to pray for every passing ambulance, every stranger we meet on the bus and about every decision we make in a day and even while we’re snoozing? I think the answer is clearly “no”, but here are some ways this question has been answered throughout the ages:

There is much overlap between these traditions, but isn’t it interesting that no one (to my knowledge) has suggested the automation of prayer? Adherents of Buddhism have prayer wheels, which they believe mechanically automate the oral recitation of their mantras, but repeated attempts to make a prayer management application for Christians have proven rather unsuccessful. Why? Can Christian prayer be automated?

Okay scratch that last idea :-). We’ve crossed the fine line between helpful and hindering technology. Maybe prayer automation has met limited success because of one faulty assumption; namely that computers can automate the work of the Holy Spirit.

Aha, “Merit and Grace” all over again–computer effort and the work of God!

While praying with a friend about this, I said, “Lord, your Holy Spirit is better than any technology we could develop, please move us to pray and help us to pray”. It stunned me to recall that reminders to pray, desires to pray, and the content of prayer are totally of God–no wonder it is overwhelming in scope and breathtaking in power! In fact, the Holy Spirit and Jesus Christ themselves constantly pray for us. They obviously do not use technology to help them and their divine power is poured out to help us in prayer.

But where does this leave level 1 and 2 apps? Couldn’t God use them? We depend on grace from the Holy Spirit which we do not control and we wonder what to do with the things under our control like apps and smartphones. With such devices there is a risk of losing the heart of prayer, but there is also room to use the merit God has given us to invent tools that help us obey him (if you’re using stickies on a wall or a prayer journal, that’s man-made technology too!).

Adam and Eve tried to cover their nakedness with fig leaves after they sinned and God graciously clothed them with superior animal skins instead while promising a future supreme clothing in Christ. As we pray and invent tools to help, God graciously clothes our prayers in his own while promising a resounding Amen to all we ask in his name. And that’s the point of a prayer app any way, isn’t it? Not so much ensuring the act of praying happens as much as receiving the affirming love of our Father’s, “Yes!”

Prayer isn’t a burden to be automated, it’s a desire to be satisfied, a discipline to be honed, a relationship to be enjoyed.

I close with these words from Spurgeon:

When prayer is a mechanical act, and there is no soul in it, it is a slavery and a weariness; but when it is really living prayer, and when the man prays because he is a Christian and cannot help praying, when he prays along the street, prays in his business, prays in the house, prays in the field, when his whole soul is full of prayer, then he cannot have too much of it.

P.S. If any of you try out any of the apps I linked to in this post, please leave a comment about how you like it.

P.P.S. Sorry if you feel like the title was a “bait and switch”, but I will leave the philosophical angles on the question “Can computers pray?” to sci-fi theologians (or perhaps it can be relegated to a future post).